This is an irresistible little film. I like it because of the candid confessions, because the interviewees illustrate a shared humanity, rich with faith, regret, love, vulnerability and determination. Something too about the relentless movement and pace reflects a snapshot of life in motion, literally and figuratively. A simple idea, cleverly executed. I wondered how they did they did it and found this photo from an older Guardian story. 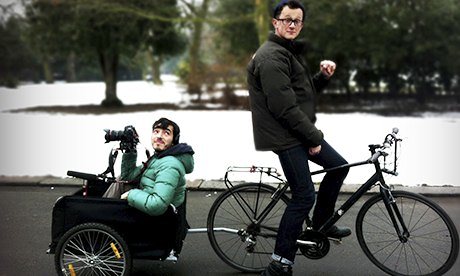 Imposed internet outage for these last couple of weeks as I have moved home. Same area, but to a lovely Victorian garden flat. Bunny is pleased.

Whilst trying to fill nearly two weeks worth of gloomy winter nights I found myself rummaging through old wallets of DVDs and CDRs of music and films. It seems with an absence of goofy, American comedy downloads I have time and patience to watch something mildly educational.

2004’s A Brief History of Disbelief by Jonathan Miller is an insightful three part documentary. He’s a less noxious spokesperson for athesism than irritant Richard Dawkins, who incidentally makes a token appearance as ‘Biologist’, looking younger and peculiarly ruddy cheeked and windblown.

END_OF_DOCUMENT_TOKEN_TO_BE_REPLACED

Found a charming documentary on BBC iPlayer. Naturalist Joe Hutto imprints himself on to a brood of wild turkeys and spends eighteen months as a turkey parent. Beautifully shot, key moments from Joe’s experiences with the turkeys are meticulously recreated, deep within Florida’s Everglades forest. Joe’s gentle narrative and thoughtful, occasionally philosophical observations, combined with a mostly acoustic Americana soundtrack (The Be Good Tanyas make an appearance) elevate this beyond a simple wildlife documentary toward a more personal, affecting tale.

Download My Life as a Turkey torrent or watch on iPlayer until 14th Speptember 2011.

Ooo, some great images in this teaser trailer for an HBO documentary about the ‘Shukar Collective‘ a Romanian music project that fuses electronica with Ursari (one of the groups of Roma people) music.

Not for the fainthearted, but very interesting. Each programme in the five-part series covers a different branch of surgery. Part one is about neurosurgery “Into the Brain” and shows live brain surgery on a conscious woman.

Into the Brain is now available for four days on iPlayer, or failing that a torrent is also available. Old timers can also buy the DVD.