I met Garland Seggerman at a bus stop on the old Route 66.  A tall, older gentleman, he was folded into rather than seated on the bench. He uncomfortably crossed and uncrossed heavy cowboy boots bookending legs long and straight like lodgepole pine. His face lit up with a warm smile as I sat down. I greeted him, and asked what he’d been up to today.

He ruffled around in a bag and brought out a handful of colour photocopies, pictures of damaged saddles. Some had stuffing bulging out, others torn with closeup shots of weakened stitching.

He was a saddler. He handed me his mildly terrifying business card.

So began a long and unconventional relationship.

Garland took me out, a week or so later to see the horse races at Albuquerque racecourse. We both travelled by bus. Garland doesn’t have a vehicle anymore, although is quick to clarify that he could if he wanted to. I helped him carry a handful of racing crops, of varying stiffness and colour, and a custom decorative saddle he’d made.

He knew a lot of people at the track. He waltzed by security with a nod, into the jockey’s changing room to hand over the saddle that had been bought.

He sold only a few crops that day but renewed friendships, something perhaps more valuable for a man whose business is modelled on a time before mass production and the internet.

We met for lunch a second time.  I asked about his work and expressed an interest in making a small film about him as the experienced craftsman. He seemed keen although he was thinking of something more in a commercial style. Garland loves what he does, but he knows that it’s work that pays the bills. He’s hard nosed in his own way. Potential creative differences aside, we planned to meet for a few hours of filming at his cabin in the South Valley, Albuquerque.

Before we set the date I searched the internet to research Garland. Only one saddlery forum posting from several years ago mentioned him. He was being recommended widely although clearly not contactable online. One friend added,

Garland is never going to get on a computer he spends all his time flirting with the girls at the bus stop.

With my partner as my cameraman, we set off to the South Valley, the more verdant farmland in the South of Albuquerque. Garland was quite sweetly nervous as we set up an interview in the yard.

We later struggled unprepared for shooting in his workshop. It’s a modest cabin which is also his living room and bedroom. Piles of leather, glues and tools bulged out of every space and hand scrawled names and numbers were stuck to the wall.  The windows emitted a jaundiced pallor from sheets pinned up as curtains. Regardless, it’s Garland’s workmanship that shines. When he fires up his antique Singer sewing machine, his hands are sure and confident. With over forty years working leather, Garland wants to publish a book about what he’s learned. And he keeps learning. He knows the latest materials used in saddlery and which materials are actually worth the money.

We finished filming, and I promised to let him know how the editing goes. I saw him a few more times before I left to go travelling. He gifted me with a tiny horseshoe for good luck which I pinned up in our Winnebago above the door.

Despite being reluctant to embrace the internet, Garland is a prolific texter. During my travels of seven months, there were few days he didn’t check in, to tell me what he was cooking for dinner, how the weather was, or what he was working on, often with a photo. There were times when I hadn’t texted back or when the fires were raging in Washington, that he would text to make sure I was ok. For that I am deeply grateful. Had I truly been lost, it would have been Garland who would have been the first to know.

Garland still texts me, and if I’m lazy in responding he’ll call sometimes to check on me. I’m pleased to be able to tell him his film has finally been finished. Oh, and he’d want me to tell you he’s available for custom work.

Update: Garland Seggerman passed away in Albuquerque on June 2nd 2017 after a short illness. He will be sorely missed by many. 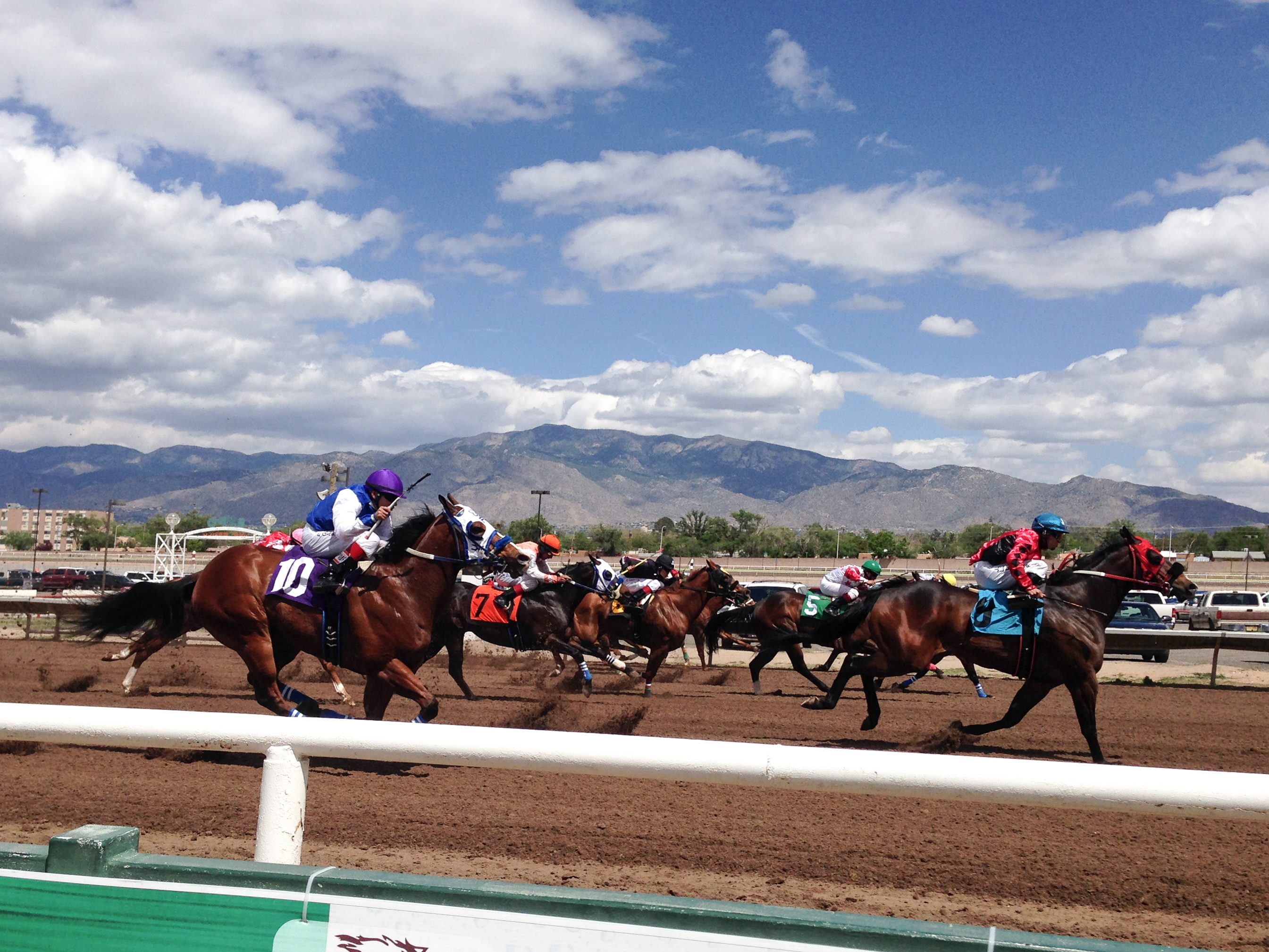 The track, the Sandia mountains in the distance

Jockeys getting ready to ride 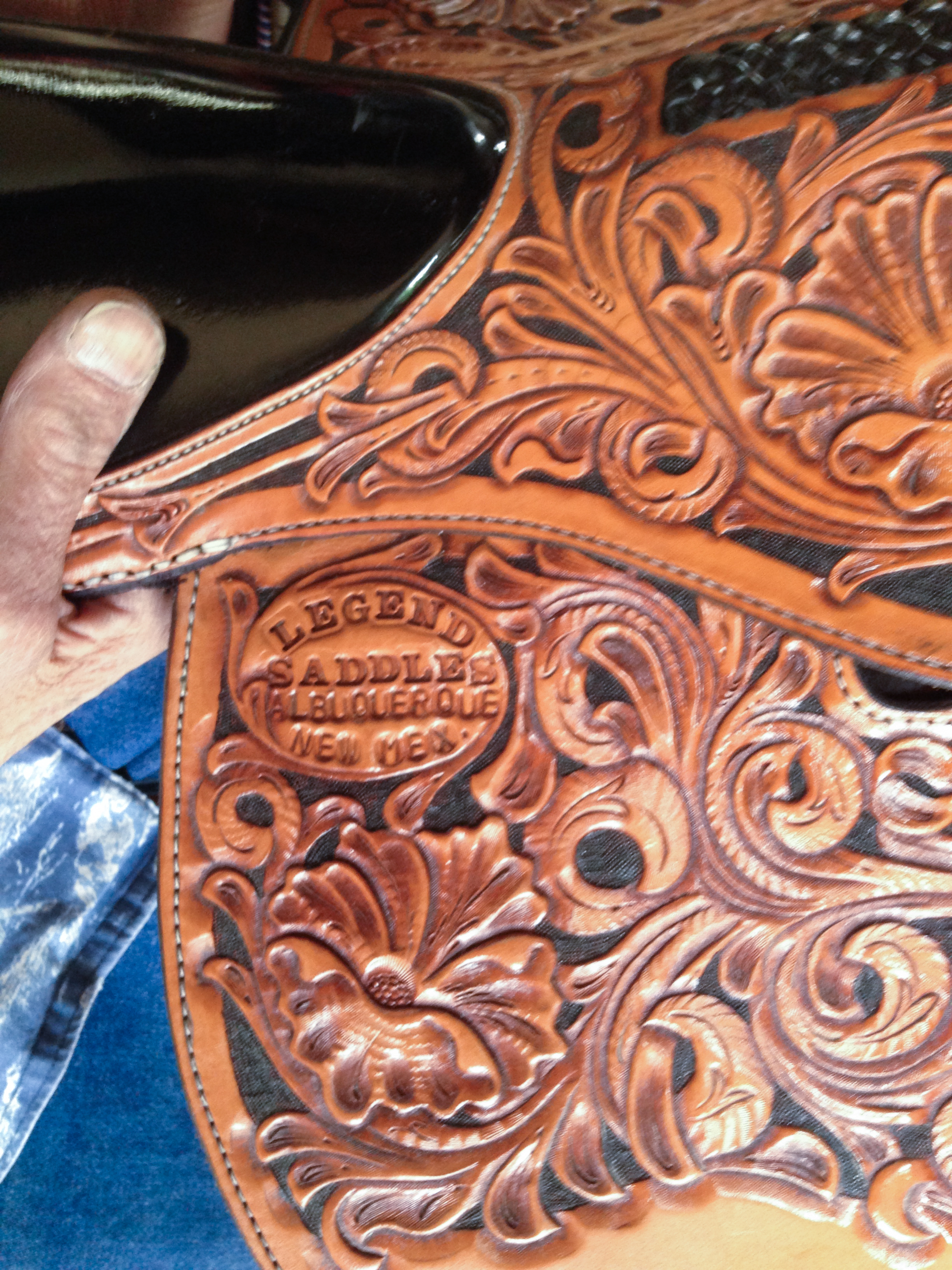 Detail of the leatherwork 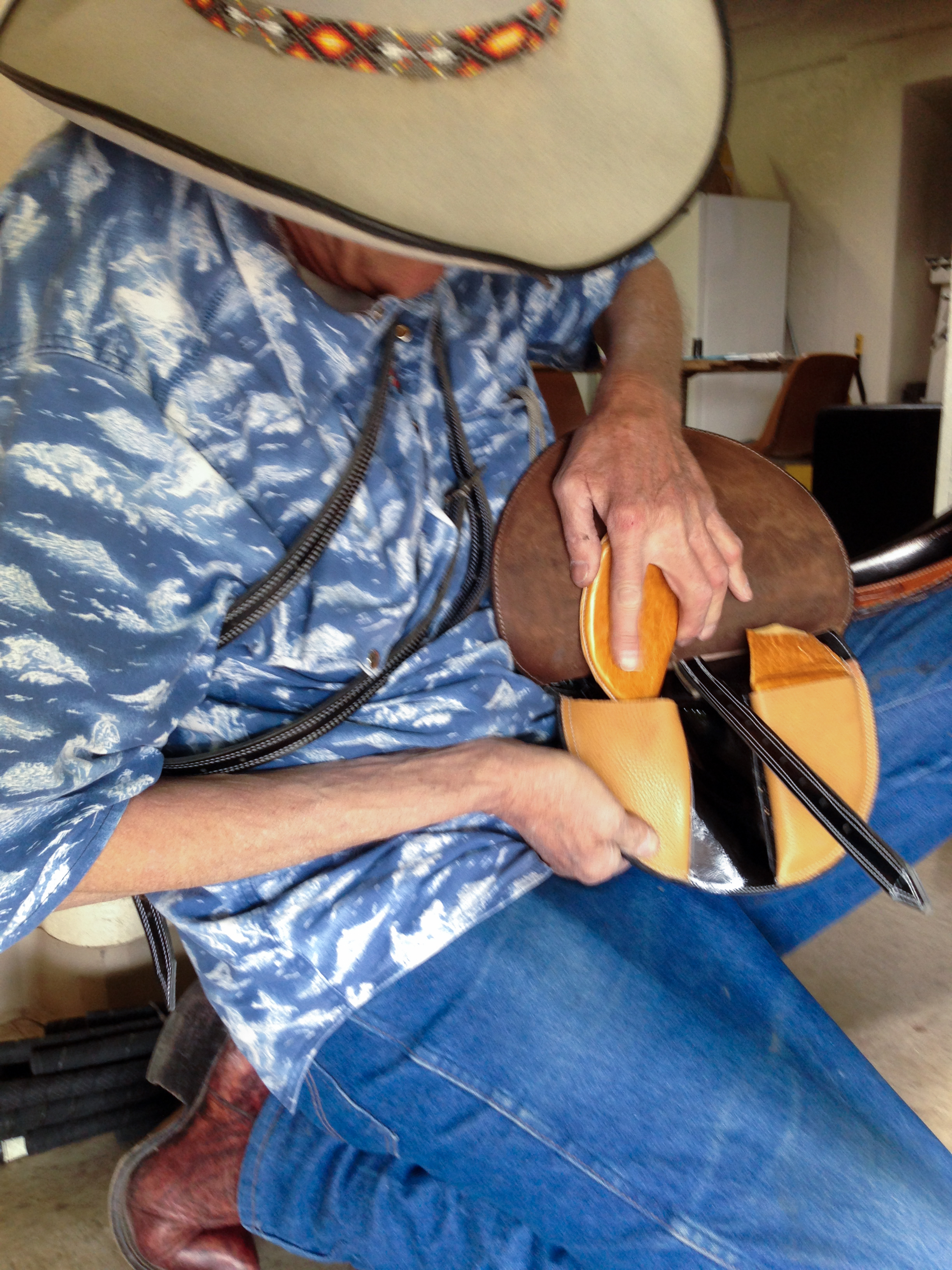 How the weights are added to the saddle 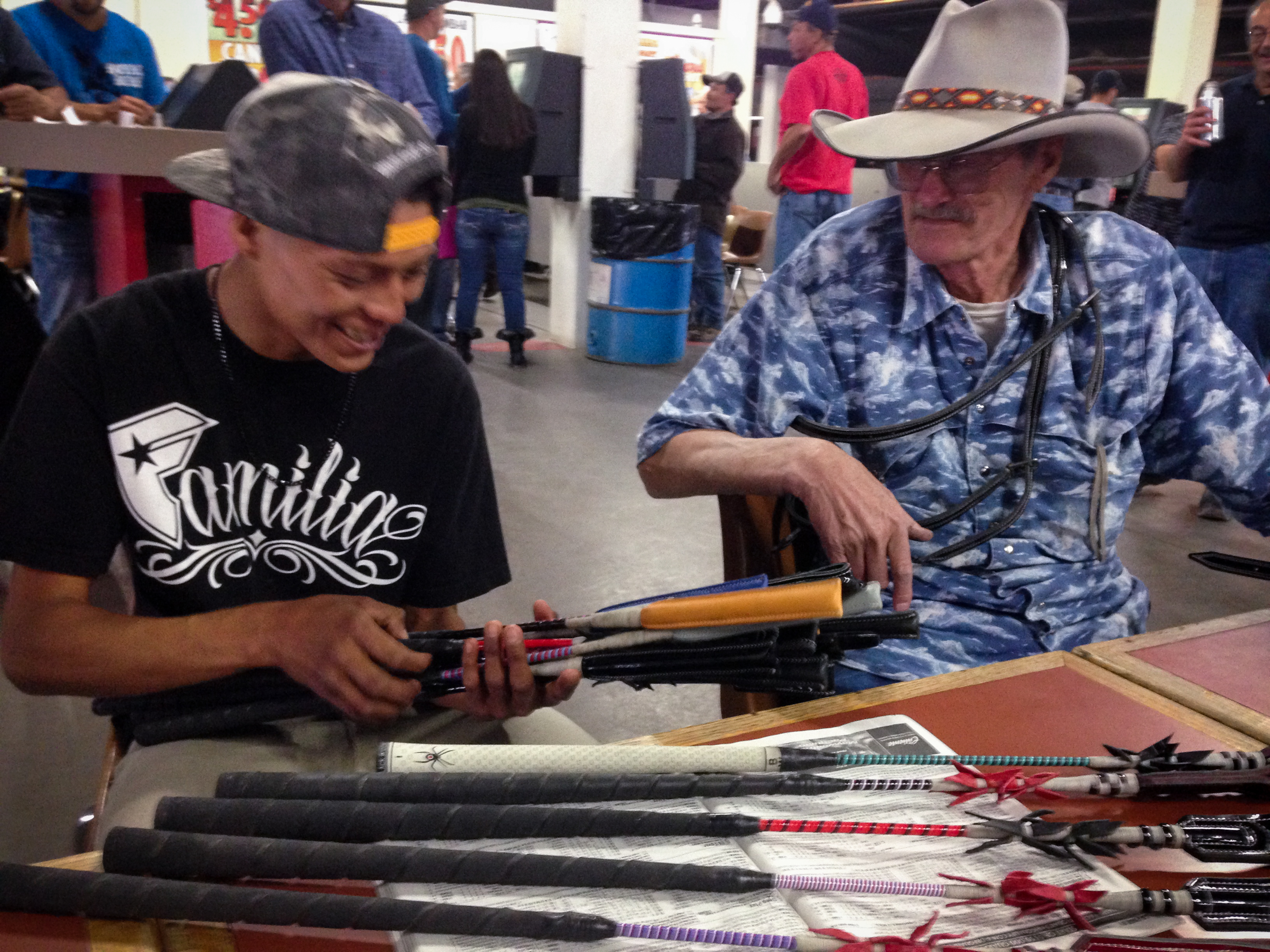 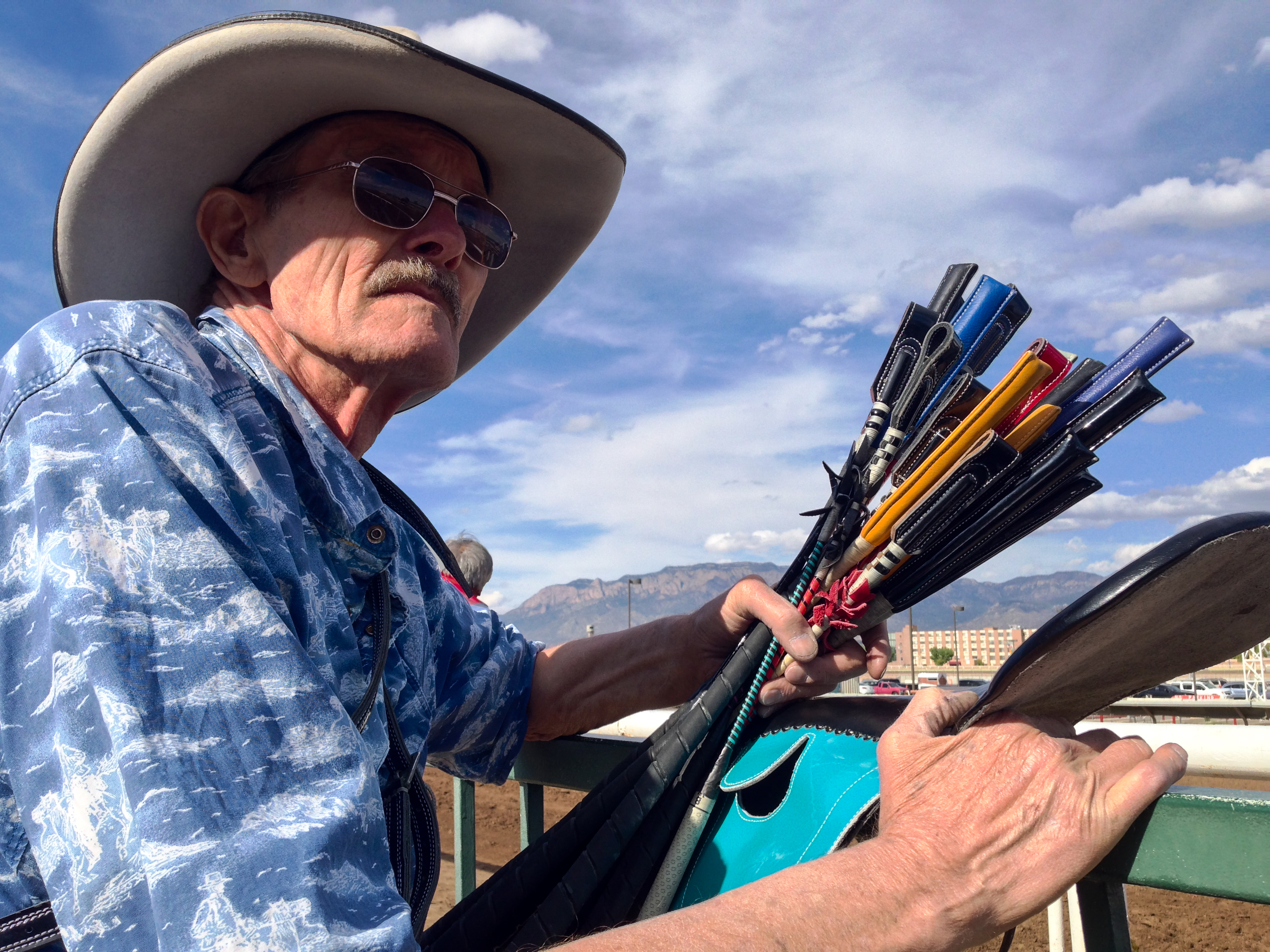 10 replies on “Hand Made Original”

Awesome. Thanks for sharing this piece. It’s a different world!

I have known garland since 1975 we were close. He was the Good br other I never had I last spoke to him about a month ago and I got the news I was devastated. Is it possible you would consider selling me a copy of his video? He will be greatly missed

Hello Barbara. I’m heartbroken too. He was one of a kind, and a great friend. I’ll email you at your address I have on file, and send you a DVD when I have your details. Thanks.

Garland was a great friend of mine! We also did business together as i sold jockey equipment at penn national and bought many saddles and whips grom him for resale, he also made several pairs of chaps and western belts, lost track of him then reconnected and visited often by phone, i too would like to purchase a copy of the dvd my email is jockeyagent104@yahoo.com RIP my friend

I am Garland’s Daughter-in-law. This video is very special to Chris and I, since it gives insight to a man who loved his family from afar. As we wrap up his final affairs, and make arrangements, we want to make sure we are in contact with those who were a part of his life. If you need to get in touch with me or Chris, please email kris.long@gmail.com
Thank you.

Garland was my friend and taught me the saddle making trade. Happy Trails old buddy!

Garland was one of a kind – our lives intersected several times since we first met in Stockton, CA in 1969.

We kept in touch until April of this year, and then I heard no more…

If any of you who have written above would like to jaw a bit about his life and times – please contact me at jewelryartschool@aol.com

And yes, I just read the news that AOL is about to cease existing – so maybe ya better hurry up?

Thanks Brian! Great to find another friend of Garland out there. I think he’d be tickled to see all his friends find each other this way. Kind regards! Lucy

I can’t believe I’m just finding out about his passing. We texted a few times a year, especially at the holidays. I got wrapped up in things this year and only sent a Christmas card, but wondered why he hadn’t contacted me. He taught me a lot about leatherwork, especially about making chaps and leggings at Penn National. He will be greatly missed.