Barked commands emanate in a strong East coast accent from the common room next door.

It takes a moment for me to realise it’s an automated travel information service. I enter the room to see Don Atkins strutting back and forth with irritation, head down, mobile phone gripped to his ear.

Standing at around four foot five, Don’s nasal voice with heightened volume more than make up for his stature. He wears a blue checked shirt tucked in, beige slacks and sandals. His paunch belly pulls his belt low at the front although the suspension holds firm hoisted high up his short back. Oversized 70’s spectacles almost hide the squint and astigmatism in one eye. He has patchy dyed brown hair, fuzzy and lifting at the sides with a small bald patch on top.

Finding the scene before me bizarre I look for collusion with another guest seated at a table. Bob, a tall friendly Christian in town for a Jesus convention, raises his eyebrows, smiles and nods in confirmation.

I return to the front desk. A short time later I again hear him shouting at the shared, ageing computer “Come on! Come on!”.

I hear a deliberate sigh of defeat and Don trucks over to me with short steps. “I just don’t know, I can’t read my email on that computer.” he says shaking his head.

I walk with him back to the computer whilst he explains too loudly about how he’s “not sure if it’s the computer or the internet”. Leaning over I see an error message stating Yahoo is having problems. “I just don’t know” says Don, “Is there a public library around here?”. Don delivers all his sentences with firm and equal emphasis on each word, almost as if I were hard of hearing, or perhaps he were. I give directions to the local library.

I stand and turn to him, now curious “Are you from New York?”.

He blinks at me, registering me fully for the first time, and I’m embarrassed as I track his eye movements rapidly appraising me from head to foot.

“Yes, the New York area. There are three great cities in this country.” he declares in a way that feels rehearsed, “New York, New Orleans and San Francisco. You want a good meal in one of those cities, walk into the nearest restaurant.” He blinks again at me. “I like the sun but I have no time for Florida. My mother lives there. She’s ninety eight. It’s a place for old people and immigrants. They roll up the sidewalks at five thirty.”

He’s pleased with this line I can tell, and he’ll tell it to me again before he leaves. When he does check out, it’s only after another round with the automated rail information line at full volume. He takes time informing me that the Amtrak headed East has been delayed in Flagstaff for two hours. As he leaves I update the hostel software and notice his email address is railenthusiast07. 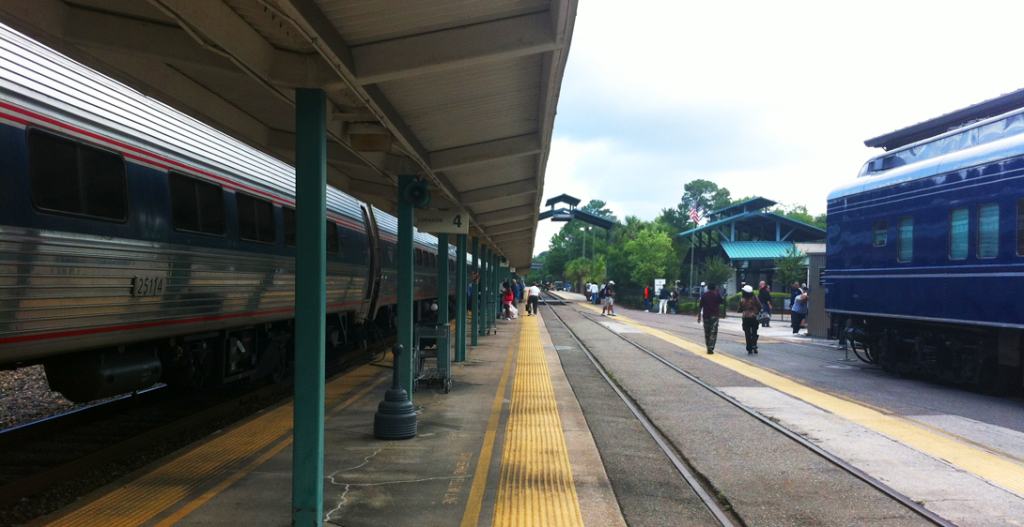 2 replies on ““They roll up the sidewalks at five thirty””

Nice lyricism, thats pretty much a short story there. Postcards from the edge of
all be quirky…

NY, the town so nice they named it twice, as David Letterman used to say, NYORlunz, as its residents pronounce it, and San Fran are all definitely great cities. I come from Chicago, though I have lived in Albuquerque since 2/2002, and Chicago is a great town, too. Its a great restaurant town; I miss the pizza there. BTW, deep dish is NOT the prevailing kind of pizza in Chicago. Better than 90% of the pizzas eaten in Chicago every year are thin crust, single layer pizza just like everywhere else. Its just better. Its cheesier, for one thing, and the oregano is put on top of the pizza before baking, and they don’t skimp on the ingredients. At virtually any price point, your average Chicago pizzeria is better than anything to be found in Albuquerque. To get anything good here, you have to order extra cheese, and double virtually all the other toppings, too.

But its not just pizza–I pine for Al’s Italian beef combo sandwiches–Italian beef with Italian sausage, dipped QUICJLY in au jus. People try to do that elsewhere, sometimes, but they inevitably dip it for too long, and it gets all soggy. From May to about October, there’s a lemonade stand right across the street from Al’s that provides many kinds of lemonade which, to me, are the perfect complements to Al’s beef.

And Chicago dogs–no ketchup or other tomato products except sliced tomatoes themselves, sometimes, bright yellow mustard, onions, a little relish or “piccalilly” as we call it in Chi-town, or maybe just a kosher dill spear. And no kraut, either. Kraut on dogs? UGH!

One of my favorite foods from Chicago, though, is not at a restaurant. You haven’t lived until you’ve had Latvian Rye Bread from the Baltic Bakery in Chicago. It is a dense bread, even more than pumpernickel, which it resembles in some respects, and is a good bread. Where it really shines, though, is as toast, slathered with a little butter or cream cheese. Toasting brings out its rich, nutty flavor, and its just heavenly.